The University of Maryland and Lockheed Martin Corporation established a strategic partnership in 2010, building on more than 60 years of close collaboration. This alliance provides a framework for closer cooperation in sharing and developing research, resources, talent and innovative solutions to national and global challenges. The strategic partnership, managed by the University of Maryland's Division of Research, was originally established with a focus on three key areas: Centers of Collaboration, Joint Pursuit of Business Opportunities, and Enhanced Research and Development. The strategic partnership has supported new research in autonomy and robotics, directed energy, human performance and sensing data analytics, artificial intelligence, quantum information science, and other areas, including a joint Center for Logistics Collaboration (CLC). 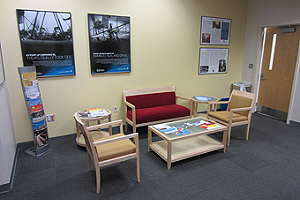 A suite has been provided by the A. James Clark School of Engineering and the Division of Research as a facility to enable and foster the partnership between the University of Maryland and Lockheed Martin and as a resource for faculty and campus visitors.

The Lockheed Martin Partnership Suite is on the second floor of the Jeong H. Kim Engineering Building (Room 2203). It can be used for meetings, remote office working and events.

The suite contains the following facilities: 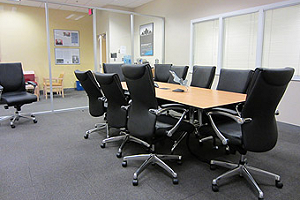 To use or book the Partnership Suite office space or conference room, please contact:

A Long History Together 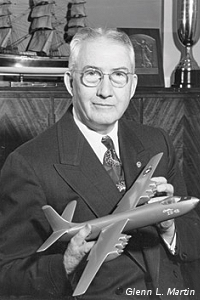 Aviation pioneer Glenn L. Martin (1886 - 1955), founder of the Martin Aircraft Company, was pivotal in the development of the University of Maryland aerospace engineering program, which now consistently ranks in the top 10 among aerospace engineering departments in the country. The 1945 Terrapin Yearbook was dedicated to Glenn L. Martin "who stands as a symbol of the progress to come for a great nation and for this University as a part of the nation." In 1987, Martin was inducted into the A. James Clark School of Engineering Innovation Hall of Fame for his numerous pioneering innovations in the early days of aviation.

In 1944, in commemoration of the 50th Anniversary of Engineering at Maryland, Martin made a gift of $1.7 million (current endowment value $59.4 million) to the university to establish instruction and research in the aeronautical sciences. A second gift of $800,000, named in honor of Martin's mother, Minta Martin, was made the following year. Today this endowment is a major source of research funding for faculty, staff, and students in the A. James Clark School of Engineering.

The Martin or Lockheed Martin name is associated with numerous prestigious awards, medals, academic scholarships and professorships that are given out to faculty, students, and alumni of the university. Lockheed Martin also generously supports student programs, university events and competitions, student facilities, classrooms and laboratories.

The University of Maryland and Lockheed Martin Corporation opened a major new chapter in their more than 60-year history in 2010 when Dr. C. D. Mote, Jr., then-President of the University, and Dr. Ray O Johnson, Senior Vice President and Chief Technology Officer of Lockheed Martin, agreed to create a unique, strategic relationship between the two institutions.

The new agreement provides a strategic framework for current and future cooperation that leverages the resources, talent, and ideas of both institutions to produce innovative solutions for global and national security challenges. The agreement provides for work in three key areas: Centers of Collaboration, Joint Pursuit of Business Opportunities, and Enhanced Research and Development. The University of Maryland's Division of Research oversees the strategic relationship created by the agreement.

"The University of Maryland is thrilled to be formalizing our long-term partnership with Lockheed Martin Corporation. Our combined strength will provide capacity for innovation needed to respond to complex global issues and national security challenges," said Dr. Mote, who is the Glenn L. Martin Institute Professor of Engineering. "Our partnership will allow us to undertake major projects benefiting our national prosperity and security."

"Lockheed Martin's strategic relationship with the University of Maryland leverages the best talent and ideas from both institutions to produce innovative solutions for our future," said Dr. Johnson. "This partnership represents Lockheed Martin's commitment to its community and future workforce, and it represents a strategic business partnership that demonstrates the power of collaboration between industry, academia, and the government."

A key part of the new strategic relationship are the areas of strategic focus, which will support sustained cooperative work in mutually agreed-upon areas - initially logistics and sustainment, climate change, and cyber-security. Another emphasis of the strategic relationship is to capitalize on the combined ability to optimize resource use and complementary strengths and capabilities to respond successfully to federal agency and other third-party needs for products and services.

Lockheed Martin continues to support cutting-edge research at the University of Maryland in a number of areas, such as cultural modeling, computer vision, advanced materials and sensors, bioinformatics, healthcare, supply chain management and logistics. Through the new strategic relationship, the two organizations plan to enhance and expand their existing robust R&D relationship leveraging the increased use of facilities, technical experts and streamlined processes. The partnership will also enable further opportunities for executive and professional education, work and research experience and talent acquisition.